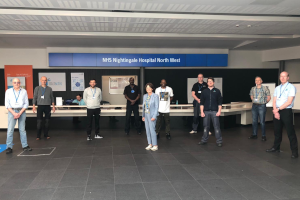 MTS were proud to be able to support Sir Robert McAlpine /IHP in the early stages of the construction of the Nightingale Hospital North West. Many of us are more familiar with visiting the Manchester Central Conference centre to attend IHEEM but this year MCC was transformed within 4 weeks into a Level 3 field hospital. Our team on site were managed by Caroline Finlay and comprised MTS and Avensys engineers. On site for the whole period as site representative of MTS was Kim Lovick. Kim worked for MTS for more than ten years before pursuing more international work. It was great to have him on the MTS team again.

Over 3000 items of equipment were asset tagged and commissioned and while this facility was not designed to accommodate ICU patients, it still played a major role in contingency planning and the support to the North West region in the COVID-19 crisis. Following completion of the construction and handover to Manchester University Foundation Trust, the host Trust, the whole provided valuable equipment advice and support to the SBS procurement manager and ensured that all equipment was appropriately commissioned, and that training systems were in place.